The Giant in the East – I

This three part series examines the rise of India as an economic giant, the threats that India faces in this remarkable rise, and implications for Pakistan.

Before the Twenty First Century

As the twentieth century dawned, the world had continued to consolidate the technological boom during prior two centuries. This technological progress started with the invention of the printing press in fifteenth century. This invention quickly enabled mass availability of knowledge. Man began exploring the world around him more intently, by compounding the knowledge already gained by the earlier pioneers. As the scientific renaissance kicked in, man began accumulating more wealth by producing, discovering and innovating further. With the arrival of the scientific renaissance, the human output growth rate that had remained close to zero for thousands of years before, started rising  at a good multiple of its population growth rate.

The arrival of scientific renaissance coincided with incremental social awareness that began permeating the human consciousness. The United States came into being right in the midst of the great human renaissance that was exploding across the western world. The renaissance had begun moving forward in fits and starts towards institutionalizing the ideals of human liberty and freedom. The United States, with its rich natural resources and eager migrant entrepreneurs, began taking a lead in the social and scientific revolution that had begun sweeping the western civilization.

END_OF_DOCUMENT_TOKEN_TO_BE_REPLACED

What Makes a Terrorist?

How do you turn a young man or a woman into a terrorist, particularly a suicide bomber? The answer is a mystery to me as well as a large number of Pakistanis. We thought we had a predictable answer a few years back. The poor underprivileged children studying in hard-line Madarssas could be brainwashed and turned into killing machines. But if that was the real answer we should have had thousands of terrorists running rampant, thankfully this is not the case. More recently we are increasingly coming across educated upper middle class Muslims who have become hardliners to the level of resorting to terrorism. Some of them have in fact been living in conflict-free countries of Europe. So again, what changes a person into a killer?

Unfortunately to be effective and lethal, terrorists do not need a large number of recruits at any given point, they need only few but they do need a steady influx of new blood. We need to understand what factors would facilitate the terrorist agenda. I think one of the very fundamental mindset at play here is the distortion of concepts of Duniya and Aakhrat. Islam in general gives more importance to Hereafter than this world only to discourage the obsession of pursuing worldly gains alone. It was never meant to undermine this world totally. If that was the case, Islam would not have put so much emphasis on Rights of fellow human beings, on the conduct of good Muslims and so on. But take this view to the extreme, and observe how it can get warped. If someone starts to believe that world is a prison and many of the positives it has to offer are in fact fitna, then obviously the best thing one can do is to escape to hereafter as quickly as possible. And then what better way to enter Jannat then as a martyr who are suppose to get the highest echelons of heaven. This chain of thought would appear quite logical to an extremist. At the very extreme even collateral damage can be justified; killing a child of rival sect can be viewed as protecting the child from hell which he would be destined to go if he had lived to adulthood. Combine this logic with a sense of injustice prevailing in the Muslim youth of today on account of war on terror and you have a fertile ground for extremism.

END_OF_DOCUMENT_TOKEN_TO_BE_REPLACED

Three weeks after the floods have broken Pakistan’s back, the international community is yet to show its resolve in helping a drowning country. The reasons for such a slow response are erroneously being understood in the context of the Pakistani government or the current crop of civilians in power. However, this is a narrow twist to the reality. The real angst and distrust being displayed by the world is at the Pakistani ‘state’. The situation is also reflective of the duplicity of international opinion makers and power-centres in labelling Pakistan as a country with an ‘image problem’.

One is sick of reading nauseating reports on how the post-earthquake assistance was ‘diverted’ or squandered. The truth is that in 2005 a military dictator was ruling Pakistan and the entire world was doing business with him. At that moment, the issues of democracy, transparency and human rights all took a backseat and strategic imperatives prevailed.

Pakistani, and by extension the global media, are regurgitating tiresome cliches about corruption without talking about reforming state institutions. For instance, not a single commentator has said that we have a new accounting system in the form of the Project to Improve Financial Reporting and Auditing (Pifra) in place. But it has not been put into place effectively at the provincial and district levels. This is the way we will ensure transparency and good tracking of money received and spent. END_OF_DOCUMENT_TOKEN_TO_BE_REPLACED

The State Must Go Weeding

Ali Abbas, PTH’s new author has contributed this thoughtful  piece with a sanguine conclusion – “This burden of existence lies on the state’s shoulders, whether we like it or not”

For all its shortcomings and its stunted political development, the Pakistani state has been faced with multiple challenges over the last ten years. Each of these challenges have highlighted its weaknesses, wrenched out a response and provided a vital prod in the ‘right’ direction.

After the takeover of government, Musharraf’s media reforms not only brought national focus on the lack of an independent media in the country, but triggered a decade of development for the media industry which has been unprecedented in the history of the country. A maturing of this phenomenon is the criticism that this free media is now receiving on issues ranging from reporting ethos to nonpartisanship, vital input in the feedback loop which is a pre-requisite for improvement. In 2007, the Lawyers Movement in turn focused our attention on the previous impotence of the judiciary, its previous acquiescence of the orders of military dictators, and its own weaknesses in the light of its role in maintaining the authoritarian status quo and its frail support of democracy. In Chief Justice Iftikhar Chaudhry, the nation hailed the torch-bearer of a powerful and independent judiciary which could play a more effective role in maintaining democratic checks and balances on the legislative and the executive. Even though we were placing our absolute trust again in persons instead of offices, in personalities instead of institutions, the nation finally appeared to have crossed a significant obstacle to stability. It is now that the nation looks towards the mounds of pending cases, and the provision – or the lack of – speedy justice to the masses that a dialectic has been initiated which we can only hope will lead to the development and maturing of the judiciary as an institution. END_OF_DOCUMENT_TOKEN_TO_BE_REPLACED

I had posted a short version of this post on my personal website which quite unexpectedly drew the attention of several Indian internet warriors on their cyber-raths. It is a message that needs to be shared here. I have therefore decided to expand this and say what needs to be said. I have always supported India-Pakistan dialogue and the peace process and the purpose of this post is not to demean India or Indians but to express the shock that many of us – peaceniks – have experienced in the recent days. I have been accused of being ‘soft’ on India and constantly under attack by jingoists in Pakistan. Therefore it pains us to see such displays of insularity, indifference and isolates us with the remarks: “see we told you so….”

Manmohan Singh whom I have always held in high regard, disappointed millions in South Asia with his distastefully ill-timed hard talk during his Independence day address. As if Pakistan’s current misery was a time to blow India’s power-trumpet.

In fact the blackout in Indian media about Pakistan’s dire floods’ situation is amazing. Major newsmagazines such as India Today and Outlook are silent and the national newspapers have not covered much except the same old hackneyed stuff on terror, terrorism and what a major threat Pakistan is to shining India. In times of Pakistan’s crisis, the least Mr Singh could have done was not to indulge in jingoism. But he had to appease the arsenal of a nation-state (similar to what we have to do here at such occasions). END_OF_DOCUMENT_TOKEN_TO_BE_REPLACED

Pakistan is passing through a vicious negative feedback loop that is beginning to gather momentum. The vicious circle is a result of country’s inability to provide for the basic individual rights of its citizens. Combine that with a burgeoning population, and the rampant nationalist tensions within the society that have been suppressed in the name of religious identity, Pakistan is staring at a nightmarish scenario in the coming decade. Pakistan needs to realize that the existential threat is coming from the failure of its society and not due to the external influences that consume majority of the resources of our nation. Unless we start spending on providing for the four basic rights to our citizens, the chaos will just feed on itself in the years to come.

END_OF_DOCUMENT_TOKEN_TO_BE_REPLACED

Why are Ahmadis persecuted so ferociously in Pakistan? 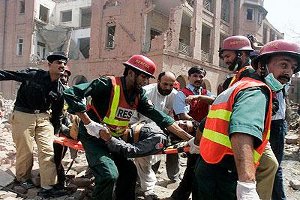 A victim of attack on Jinnah Hospital, Lahore