NPR correspondents are taking the historic Grand Trunk Road  from the Bay of Bengal in the east to the Hindu Kush mountains in the west, across the Indian subcontinent.  They talk about life along the route. This is the first post from when they arrived in Pakistan, last month. We hope to reproduce, over the next few days, here on PTH, their thoughts and impressions on the journey through Pakistan. 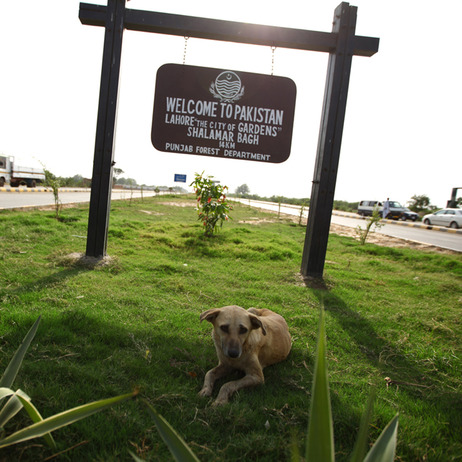 In Pakistan, The Grand Trunk Road Is ‘An Expression Of Hope’

Our colleague Philip Reeves began this journey by struggling to find the beginning of the Grand Trunk Road. We had no such problem finding where it crossed into Pakistan. Here the highway crosses one of the more heavily fortified borders on earth.

You don’t just drive across from India: you leave your car behind and walk along a four-lane highway for several hundred yards, with porters lugging your bags. You walk right through an immigration station, and under an arched gateway in a wall that’s crenellated like a castle. And here comes Phil now, walking over from India to where we wait on the Pakistan side. He’s cheerful and gray-haired, striding on the pavement through the scorching May afternoon, wearing a baby-blue shirt that shows no sign of sweat.

Here at the border, the Grand Trunk Road stands as an expression of hope. Both nations have built it up to a modern highway. The road is ready for the time when better relations allow more trade across the line where India and Pakistan have repeatedly fought wars since their independence in 1947.

It’s still just a hope. The reality is a tiny stand beside the road, where Mohammad Shoib works. He’s a clean-shaven 16-year-old in a striped gray shirt. He spends his mornings in high school and his afternoons here in the sun. He sells toy cars, Chinese-made MP3 players, and miniature soccer balls to the trickle of travelers who pass through. Shoib says the stand brings in the equivalent of about $12 per day, which he gives to his parents.

Travelers buy their souvenirs and catch little gasoline-powered rickshaws along the road. Like many of them, we’re heading westward, toward the Pakistani city of Lahore. That city, too, has been hit hard by discord in South Asia, but there’s a delightful energy to it, a riot of green along the sides of the road, quaint wooden benches at the bus stops.

In the evening, Phil dined with much of our Pakistan crew at an outdoor restaurant. The darkening sky seemed to portend rain, though it didn’t quite feel like a thunderstorm coming; it felt like one of those summer-drought storms that threatens but never quite reaches the earth.

The waiters brought lamb kebab — bits of meat brought to the table on steel skewers the size of swords. We ordered hot flat bread called paranta, which resembles a pancake with the syrup baked in. Then, as we dined beneath the sky in Lahore, the weather intensified.

Bolts of lightning flashed across the sky. The wind picked up, carrying spitballs of rain. Gusts of wind arrived, seeming to bring along a desert sandstorm. Grit filled our eyes. We lowered our heads and covered our faces. We moved the plates to keep the white tablecloth from flying away.

Our waiters continued working as if it were nothing, serving a hot cup of tea in the midst of the tempest. They stood by attentively as if we might want more paranta with our sand.

People are accustomed to storms.

5 responses to “The GT Road Blog”